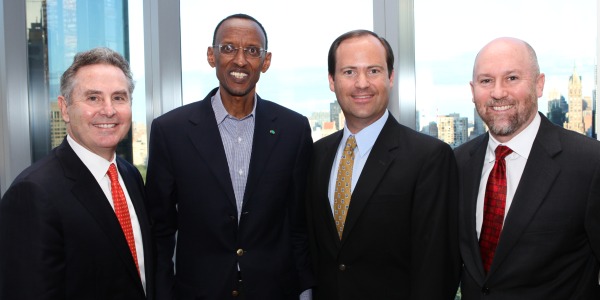 On September 18, President of Rwanda Paul Kagame announced the launch of ISOKO Institute to his Presidential Advisory Council (PAC) at a reception in New York City.

Council member Dale Dawson established the Kigali-based think tank to megaphone Rwanda’s success story and to transfer those lessons across the sub-Sahara. ISOKO (“Marketplace” in Kinyarwanda) will act as a catalyst for building Rwanda’s entrepreneurial base and for strengthening Rwanda’s job market.

SEVEN Fund Co-founder and PAC member Michael Fairbanks started off the evening by explaining ISOKO’s instrumentality in sharing the lessons Rwanda has to teach.

Following Fairbanks’s remarks, Dawson called on his fellow PAC members, including Saddleback Pastor Rick Warren and former Alltel CEO Scott Ford, to participate in the think tank’s agenda. Dawson went on to say, “We want ISOKO to be a platform, a venue, an institution that allows more voices to be heard, voices in the chorus that says that private enterprise is the answer to building strong societies in Africa and everywhere in the world.”

ISOKO’s Managing Director Jay Hein also offered remarks, inviting the heavy-hitters to throw their weight behind the institute. “You all have invested your talent and networks and entrepreneurial skills to facilitate [growth],” he told the group. “We want to understand . . . how we can get inside the story in such a way that we can help Rwanda build its promise. That’s assignment number one. Assignment number two is transferring that insight and innovation so others can replicate it.”

Prior to the remarks, Hein introduced Liberian Foreign Minister Toga McIntosh and Liberian Ambassador William Bull to a number of high-level Rwandan officials including president Paul Kagame (pictured above). Hein helped facilitate a dialogue between the two country’s officials about collaborating for economic development.

The announcement of ISOKO inaugurates a new and aggressive chapter for Africa’s leading free market think-tank.