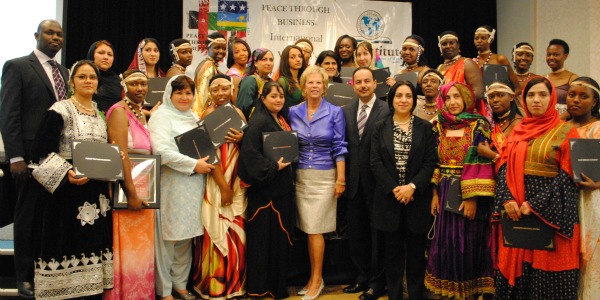 For six years, women business owners from around the United States have been doing their part to empower the women of Rwanda to succeed.  Holding to the fundamental belief that, “When you educate a woman, you educate a nation,” Dr. Terry Neese, founder and CEO of The Institute for Economic Empowerment of Women developed the PEACE THOUGH BUSINESS® program in 2006. Since its founding, the program has sought to promote international peace and facilitate local economic stability for women who have suffered oppression, marginalization and whose homelands have been devastated by war, genocide and poverty.

2011 marked the 17th anniversary of the end of the 1994 Rwandan genocide that killed nearly 800,000 people.  Since then, the people of Rwanda have taken huge steps towards peace, recovery and women’s rights.  The fight for basic human rights for all women around the globe is slowly crawling towards equality and most countries’ efforts are lacking, even non-existent.  Rwanda, however, is a shining example of a country that has suffered through war, poverty, and the extermination of its masses only to regain its composure and lead the world in empowering its women. In fact, today there are more women holding government positions in Rwanda than any other country. After the killing of so many Rwandan men, Rwanda’s population is now comprised mostly of women. So it is partially up to the women to govern, rebuild, and thrive.  Those who previously suffered have recovered triumphantly and are now the breadwinners, the business owners, and the government officials responsible for the rebuilding of a nation.

A great example of the tenacity and enterprising spirit of the Rwandan woman is Teddy Gacinya, a 2011 PEACE THROUGH BUSINESS® graduate who opened Rwanda’s first school after the genocide.  Using a vacant school and whatever supplies remained, she started the school by promoting its opening on the radio.  The school now has more than 500 students.

Teddy was mentored by Dr. Freda Deskin, owner of ASTEC Charter Schools in Oklahoma City.  She learned how to find resources to expand her school, reach out to the community for help and better manage her finances. Teddy returned to her country and was appointed to the Senate along with another 2010 PEACE THROUGH BUSINESS® graduate.  Teddy says, “I promise I will do all I can for my country and will advocate for my fellow Rwandan women.”  The institute encourages women both locally and internationally to get involved in public policy decision-making and to pay forward the knowledge they gained during the program.  Dr. Neese believes that women who do not have a keen understanding of the politics that govern their lives are in danger of allowing those politics to control their lives.

Another inspiring example of a Rwandan woman transformed is 2011 PEACE THROUGH BUSINESS® graduate, Chantal Mazimpaka.  Chantal suffered greatly during the genocide.  After losing her mother to illness at a young age, she watched her father and brother murdered in their family home at the age of 14.  She fled with her cousins into the woods to escape, but she was eventually captured and held hostage for many days at the home of one of the soldiers where she was beaten, starved, and raped repeatedly.  Chantal eventually escaped and was rescued. She began living with her aunt who raised her and her cousins from that point forward.  Chantal says she didn’t want to plan for her future because at any moment it could be taken away. But eventually she became a nurse and is now working to help hundreds of women infected with HIV.

Chantal says her aunt helped her to heal because she encouraged her to think about her future, which gave her something to live for.  She also said President Kagame’s messages about Rwanda having a future helped as well.  Today, she is the owner of Guilgal Creations Company (GCC), an event planning business where she, ironically, is paid to plan for the future—a concept she says has also helped her heal.  “I am in control of my future and this is something I can work to improve,” she says.  Chantal also volunteers with a genocide survivor’s group.

When you look at her, you don’t see a genocide survivor whose past has worn her down.  Chantal is a mother, a survivor, an entrepreneur and someone who is working to improve her country.  She says her story is important because she doesn’t want the past to die and wants to use it to help improve the future of her country.

The PEACE THROUGH BUSINESS® program brings women entrepreneurs from Afghanistan and Rwanda to the United States for an intensive business training and mentoring program each year.  First, the students spend 8 weeks learning business and marketing essentials in their home country.  The top 15 students from each country are then chosen to travel to the U.S. to participate in leadership development.   While in the U.S., they receive in-depth business training at Northwood University’s Cedar Hill, TX campus.  Afterwards, they spend one week living and working with an American, woman business owner who practices their same trade. During that time they gain hands-on business knowledge, get tips on career-family balance, and learn the importance of political activism.   In turn, many mentors have reported receiving much more from the Afghan and Rwandan women than they gave.  The uplifting, although sometimes horrifying stories of courage, determination and triumph, give the mentors new insight and a renewed appreciation for being an American woman.  The women experience a work-life balance from an American perspective, learn to be savvy business owners, and develop into powerful public policy advocates.  In the end, they learn that no matter what country they live in all women struggle to be the best boss, employee, mother or wife that they can be.

The U.S. phase of the program wraps up with the International Women’s Economic Summit and graduation ceremony where the graduates showcase their experiences and network with members of Congress, their ambassadors, prominent business owners, CEO’s and think-tank professionals from around the globe. This year’s summit and graduation will be celebrated at the United States Institute of Peace in Washington D.C. on July 23-24, 2012.

IEEW’s PEACE THROUGH BUSINESS™ program has graduated over 200 women to date with over 80 percent of its graduates still leading prosperous businesses.  Graduates return to their country poised to pay forward their knowledge. In doing so, they have indirectly touched the lives of over 2000 women worldwide—proof that American women business owners are making an impact in the lives of their sisters globally.  President Ellen Johnson Sirleaf of Liberia says it well, “No nation prospers unless there’s full recognition of the contribution of women and they are educated and allowed to participate in society. Where women are empowered the country’s economy expands . . . and the level of tension in society is reduced. Any country that wants to prosper and to have sustained growth and development has got to empower women.”

IEEW is committed to the mission of empowering one woman at a time on both a local and global level economically, socially and politically.  Dr. Neese offers a sound philosophy to put into practice: “The best way I know to enrich a nation’s economy is to empower its women.”

Institute for Economic Empowerment of Women